So the main reason for this fabulous holiday was to watch the final race of the Formula 1 season. I’ve been to Silverstone a couple of times now and Mum and I decided to go all out this year and treat ourselves.

The track itself isn’t the best in terms of racing, once it got going there weren’t many opportunities for overtaking so it ends up getting a little bit boring. Having said that, the atmosphere over the course of the weekend was absolutely incredible; there was so much going on in the fan zone and with the GP3 and Formula 2 racing there was something going on at all times over the course of the 4 days.

We got to do a Pit Lane walk on the Thursday which I was actually so excited about. We  got to look into all the teams garages and they were all doing something or other on the cars. Being the totally obsessed Red Bull fan that I am, Mum almost had to drag me away from their garage; not before I nearly cried after one of the team took some close up pictures of the cars for me 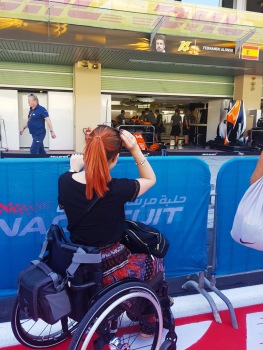 It was a bit hot, especially queuing to actually get into the Pit Lane itself, but I’d rather it be that way round than the rain in Silverstone! And the staff were really good at being on hand with bottles of water to hand out to make sure everyone stayed hydrated.

I also got to do a couple of hot laps in a car that I’ve completely forgotten the name of…useful, as always. But it was absolutely fricking incredible! I cannot explain how much I loved it. I wanted to do it forever.

The rest of the weekend is all a bit of a blur of watching practice, quali, racing and grabbing some selfies with a few people…

Including my absolute fav…

I was so totally chill when this happened. Not at all like a complete crazed fan whatsoever…

The weekend, in terms of F1 and racing, was immense. It’s made me smile so much writing this blog just because of how much I absolutely loved every second.

In terms of accessibility it wasn’t too bad but as with most places, there were definitely some things that could have been better. The track itself is pretty modern so it was all pretty flat, well-paved, nicely maintained. There were lifts to get you to the wheelchairs seats in the grandstand. They had accessible buggies to help you get from one part of the track to the other but I don’t think they had many of these so you sometimes had to wait quite a long time before they actually turned up. They also had nice large disabled toilets, buuuuuuut none of them had a lock from the inside (that I could find) so Mum had to keep guard outside!

My main issue was the way people spoke to me and treated me because of the chair. I had kind of expected it because of whereabouts in the world we were but by Saturday morning it had really started to get to me and I ended up getting pretty upset. I think it was the point where they tried to refuse me entry because my own wheelchair counted as a “bulky item – in the same way a long lens camera did” that actually brought me to tears.

I think the biggest issue was that when it came to access and mobility was that no one really had any idea or answers to questions but there was no central point of information. So not many of the customer service team were actually able to help us but then they weren’t able to refer to someone else or point us in the direction of someone who could help.

The hardest part of being accessible is all there – they have everything built and all the equipment ready and waiting, the biggest issue now is just making sure everyone knows exactly what they’re doing. Whether that means a bit more training for everyone to make sure everyone is on the same page or whether that means just having a core person/team of people who are the experts that everyone can refer to.

Overall, I’m gonna give the track 3 wheels out of 5: 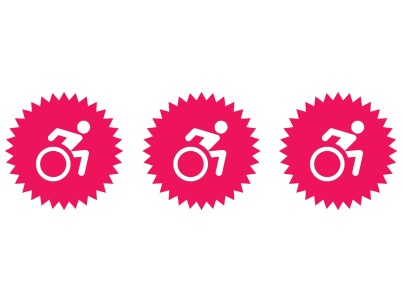 As I said, the hardest part is there; there are definitely a few minor things that need ironing out to make it easier to get around but the biggest issue was the attitudes and disability awareness of the customer service staff.

Having said all that it was absolutely one of the best experiences of my life. I loved the weekend so, so much I genuinely can’t put it into words how much joy fills my heart when I look back at all these pictures.